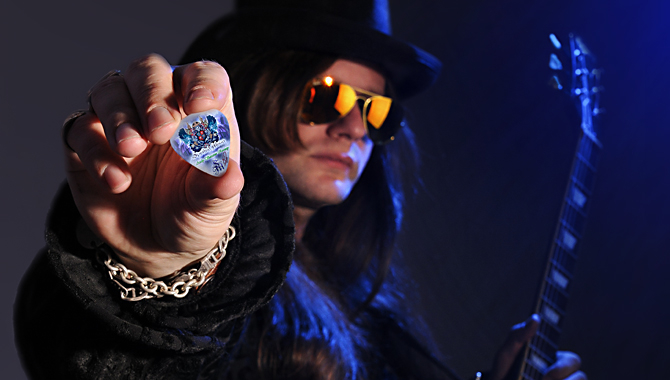 Products Used: Clayton Custom Acetal 1.52 Gauge Guitar Picks
“The Best Guitar Picks Ever…i’ve tried and played with lots of different brands over the years but this picks are out of this world….”

Lost in the Forest of a Dream, Andy Sarcone Rooney (Lead Guitarist / Vocalist) ?conjured up this hex on a windy night, under the light of a SPELLED MOON… ?Conceived in a professional studio atmosphere since the beginning and styled on an eclectic mix of Power Metal and Neo Classical flavors with movie score backgrounds. ?11 tales were written for this first album, and the magic began to happen. ?The recording sessions soared to new heights of production value ?At Tony Bongiovi’s POWER STATION studios with main manager, Rob Roy, and chief engineer, David Levy. ?Soon after kicking hard Patrick Johansson (Yngwie Malmsteen) joined ranks to play the mighty drums bringing a marvelous style and performance.?Claudio Pesavento (studio keys for Dokken / Jeff Beck / foreigner) who brought some furious melodies within his piano playing. ?Stinging with Venomous bass playing style Ralph Rieckermann (Scorpions) joined this crusade and took over the low end. ?Moving in full throttle, The band went into gear. ?Daniel Trajtemberg “DANKER” (Rata Blanca / Mario Ian / Malon) captured the essence of this musical assembly and became the visual director, illustrator and photographer. ?following destiny from shore to shore Mr Rooney moved across the mountains to build a recording studio within “BLACK GATES” upon the city of fallen angels in Los Angeles California, where the band writes,records and produces the entirety of its material.?The EP “Forsaken Spells” conjures up a compilation of legends and every day situations ?masked in fantasy tales from long forgotten times. ?Some of them rooted on real life characters from centuries ago. ?Countless moons passed by in the making of this taster ?bearing a previously unreleased Scorpion’s song (written by Ralph Rieckermann and Grace Sharington). ?Now called “Hidden in the Winds” (lyrics and arraignments by Andy Rooney). ?The following power ballad, “Soul Mates,” chronicles a man’s struggle to cope with the loss of his eternal lover & triumphantly finishing with the clincher of the trio, a thunderous call to battle aptly named “A War of Shadows.” ?A determined engineer Dave Jenkins (Uli John Roth, Joe Lynn Turner, Matt Sorum, etc.) ?mixed this Extended Play at The Wine Cellar Studios in California, ?Then Brad Vance from Red Mastering (Ritchie Blackmore’s Night, Cannibal Corpse, Fates Warning) For the final tweaks, at the dawn of 2012.
Soon after Mr Jimmy Wiggle (Zakk Wylde, Eddy Van Halen, Slash) was in charge with tweaking and modifying the amplifiers heads that will be used on the full lenght album.
by May of 2014 – as one of the many guest in SPELLED MOON,
Bass player Chuck Wright (Quiet Riot, House of Lords, Impellitteri); records 2 songs with the band bringing great tasty licks to those tunes….
Nov of 2014 – Mr Joe Petro (Heaven and Earth / Randy Piper (W.A.S.P)) becomes the permanent bass player with whom recording sessions resume bringing to the band eccentric tones and licks with his many 8 Strings Basses.?With a whole team and a strategy, SPELLED MOON keeps writing chapters for this story; ?SM plans for the full length album to be released really soon.
At the witching hour in times of sorcery we gather, under the light of a SPELLED MOON…